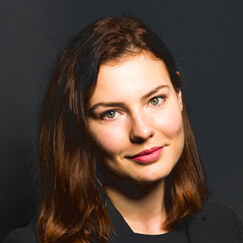 Alina joined Chambers in 2017 and has a broad commercial chancery practice, regularly representing clients in commercial, company, trust, and insolvency disputes. She regularly appears in court in her own right, as well as taking instructions as junior counsel as part of a larger counsel team (including appearing as specialist chancery counsel in divorce proceedings in the Family Court).

Alina has been instructed in cases in the DIFC (Dubai), Bermuda, Isle of Man, Guernsey, and the BVI. She is also registered to appear as an advocate before the DIFC Courts and has recently appeared unled in the DIFC Court. As well as acting as counsel, Alina is currently acting as a tribunal secretary in an LCIA arbitration.

In the course of two secondments Alina also gained valuable experience of the other side of the profession, whilst assisting on:

Alina provides advice, drafting, and advocacy at all stages of litigious disputes, and offers clients practical advice and solutions. She has been praised by clients for her thorough preparation, effective advocacy and ability to explain complicated points in a concise and easy to understand manner.

Prior to undertaking her pupillage, Alina spent a year at the Court of Appeal as a Judicial Assistant to The Rt.Hon. Sir Terence Etherton, the Chancellor of the High Court at the time. Whilst there, she worked on a number of cases spanning a wide range of legal areas including VAT, taxation of loan relationships, rights of common, competition and shipping.

Examples of Alina’s recent work include:

Further details of Alina’s experience are set out below.