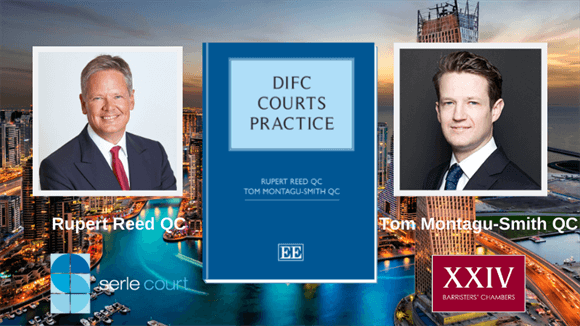 Ahead of the publication of the DIFC Courts Practice, the Editors, Tom Montagu-Smith QC (XXIV Old Buildings) and  Rupert Reed QC (Serle Court) and the Contributors would like to invite you to a series of webinars to discuss the recent developments in DIFC courts.

To join the webinar series, simply click here.  We will send you the necessary electronic invitation and a short agenda in advance of each of the webinars.  The format is intended to be relaxed and informal, with participants invited to participate from home in a discussion between the Editors and relevant Contributors.

If you know of others, for example colleagues or those working in house with clients, who may be interested in joining the webinar series, just let us know and we can send an invitation to them too.

We hope the series will present an opportunity for practitioners both to consolidate their knowledge of the core areas of DIFC law and to consider recent developments and, if possible, the general direction of travel.– Please note that spaces are limited!

Competitively priced at £195, it contains both a survey of recent developments in DIFC law, organised in chapters corresponding with the webinars, and an expert commentary on the Rules of the DIFC Courts by reference to leading DIFC Court decisions.

‘Given the established importance of the DIFC Courts and the extent of the corpus of law they have generated, the publication of this book under the editorship of Rupert Reed QC and Tom Montagu-Smith QC, two practitioners who have appeared with distinction in many DIFC cases, is very much to be welcomed.

…I have no doubt that in a very short period of time, the DIFC Courts Practice will become an essential part of the libraries of all those who practise in the DIFC Courts, those who act and advise in arbitrations seated in the DIFC, and those who may be asked by the commercial enterprises employing them to recommend whether a DIFC law and DIFC Court’s jurisdiction clause or DIFC arbitration clause, whether exclusive or otherwise, should be included in their clients’ standard terms of business.’

‘For all the Courts’ users, the DIFC Courts Practice will, I have little doubt, be the definitive guide on DIFC Courts procedure and, I think, will hasten the greatest level of understanding of this procedure…

Of the lawyers who appear in these Courts, few have made as great a contribution to the development of the laws and rules as Rupert Reed QC and Tom Montagu-Smith QC, the editors of this publication.’