The Privy Council has delivered its much anticipated judgment in Investec v Glenalla [2018] UKPC 7, the latest instalment in the long running dispute in relation to Robert Tchenguiz’s Jersey law discretionary trust (known as the TDT).

This decision is important because it determines the scope and effect of Article 32 of the Trusts (Jersey) Law, 1984, a statutory provision regulating the liability of trustees to third parties.

In August 2007 the interests of Robert Tchenguiz and his brother Vincent Tchenguiz, which had been held in a single trust structure, were separated into two different trust structures.  As part of that exercise, the shares in several companies were transferred to the then trustees of the TDT (Investec and Bayeux) and the trustees of the TDT also became liable for certain loans owed to those companies.  Although the TDT was governed by Jersey law, Investec and Bayeux were Guernsey companies and the TDT was administered in Guernsey.  Consequently, the loans owed by Investec and Glenalla to the companies in the TDT were not governed by Jersey law.

In 2010 Investec and Bayeux commenced proceedings in Guernsey seeking a declaration that, pursuant to Article 32,  they were not personally liable to repay the loans owed to the companies over which the joint liquidators had been appointed.  The joint liquidators counterclaimed for repayment of the loans.

Robert Tchenguiz (as protector of the TDT) exercised his power to replace Investec and Bayeux with a new trustee shortly after the proceedings in Guernsey had been commenced.  The new trustee was joined to the proceedings and it argued that the joint liquidators were not entitled to enforce their claims against the TDT assets on the basis that the loan liabilities had not been reasonably incurred by Investec and Bayeux and that Investec and Bayeux had committed a grossly negligent breach of trust by failing to divest themselves of the liabilities after they had been incurred.

The Board unanimously decided that the effect of Article 32 is to modify the common law by relieving a trustee of all personal liability for transactions entered into as trustee provided that the other party to the transaction knows that they are dealing with a trustee, although (overturning the Guernsey Court of Appeal) the Board held that Article 32 does not apply to costs orders made against trustees in the course of litigation.

By a majority the Privy Council decided that Article 32 applies so as to exclude the personal liability of a trustee even where the transaction giving rise to the claim is not governed by Jersey law and the claim is brought in a forum other than Jersey.  In doing so, the majority (Lord Sumption, Lord Carnwath, and Lord Hodge) held that the nature of the trustee’s liability was to be characterised for the purposes of private international law as a matter going to the “status” of the trustee under its constitutive law and therefore Jersey law was to be applied regardless of the law governing the transaction.  In a powerful and forcefully worded dissenting judgment, Lord Mance (supported by Lord Briggs) considered that the majority’s reasoning in this respect constitutes “a radical and unprincipled innovation, with potentially far-reaching consequences” and expressed the view that “the whole area will at some stage merit revisiting, because of its potential significance”.

This decision will have important practical consequences for persons transacting with trustees of trusts governed by Jersey law and those other jurisdictions where there is similar legislation (including Guernsey and the British Virgin Islands), whatever the law of the transaction.  Third party creditors will need to ensure that they have good security in respect of any transaction with the trustee of a Jersey trust, probably in the form of a personal guarantee from the principal beneficiaries of the trust.

Since the Board also held that Article 32 applies to at least some non-contractual liabilities (such as a claim under the law of unjust enrichment or a claim in negligent (or possibly even fraudulent) misrepresentation), persons who deal with Jersey trustees (especially banks and other financial institutions) will have to consider whether their present procedures for engaging in financial activities with Jersey trustees remain appropriate.

Daniel Warents (led by Ewan McQuater QC), instructed by Carey Olsen and Harcus Sinclair, appeared before the Privy Council for the joint liquidators. 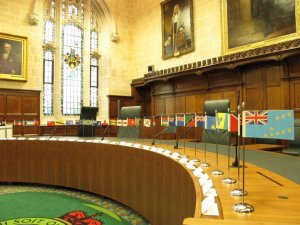